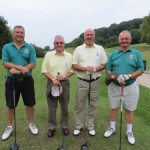 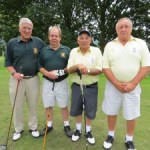 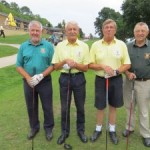 The match versus Glos. Captains is one of the longer one day matches and all us passengers are grateful to our drivers for their sterling efforts, many thanks. Once again our Captain provided terrific weather for the day and no reported sighting of Dr Foster or any puddles. Indeed the “Grand Old Duke of York” would be rather more appropriate to visit the golf course, the terrain requires careful placement of golf shots, stamina and a healthy regard for heights. Buggies were the order of the day for a number of us and very appropriate for many of our athletes !

Once again Roger had to call upon several dependable reserves to provide the Captain with a team on the day. The front three matches were very close all resulting in halves, matches four,five and six came through strongly to secure a winning lead. The tail for once did not wag, even with our own “Waggs” partnering Roger Monson, by special request! The Vice Captain is obviously running the ruler over his potential partners for next year, ooooohhh.

So the result, a narrow win for Captain Peter successfully marching us up to the top of the hills and marching down again. He’s done this rather well so far in his year, won 6, lost 3 and 2 matches halved. With the remaining match versus Somerset at Libbaton 5th September and Peter’s Captain’s Day at Saunton 19th September the end of the match season draws nigh. If you have yet to enter Captain’s Day please do so ASAP.

A very nice dinner with thanks to all at the golf club from both Captain’s ensures a keen return match at Tavistock Golf Club next year. So to the long drive home by our valiant chauffeurs, the anticipated heavy Bank Holiday traffic did not materialise and a swift return home was very satisfying.

To view the Teamsheet for the complete result click here

You can find out more about which cookies we are using or switch them off in settings.

This website uses cookies so that we can provide you with the best user experience possible. Cookie information is stored in your browser and performs functions such as recognising you when you return to our website and helping our team to understand which sections of the website you find most interesting and useful.

Strictly Necessary Cookie should be enabled at all times so that we can save your preferences for cookie settings.

If you disable this cookie, we will not be able to save your preferences. This means that every time you visit this website you will need to enable or disable cookies again.