The return to the Warren GC as a venue to welcome our visitors from Wiltshire was of interest to them because, as mentioned in his welcoming address to all, Tony Rooke described the course as the only "Links" course in the South of the County. Tony, immediate Past Captain, conveyed the Captain's apologies for not playing because something called "Work" was his problem on the day. Tony also informed all that flood defensive work was in operation affecting the 6th & 7th holes with one temporary tee and green. Predictably four reserves were gratefully included, also some infrequent match players were included on the day Glenn Page a first … END_OF_DOCUMENT_TOKEN_TO_BE_REPLACED

Mike Smith - Bob Webber - Steve Ryder - Arnie Pigeon Bob Webber is having his fair share of sunshine in his match year and today at East Devon was no exception. Arriving early at the golf club the Vice Captain Ben and Graham Heaman were sitting on the terrace enjoying a coffee and looking forward to our visitors arrival. The match against St Pierre Captains is one of our top matches in many ways, the camaraderie, the venues and importantly the renewal of friendships and fun. Eric Brown, Arnie Pigeon and John Jones to name but a few. The return to Budleigh, after a few years, was welcomed by all players. Once assembled and teams … END_OF_DOCUMENT_TOKEN_TO_BE_REPLACED 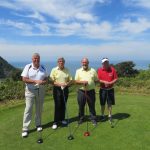 Bob Clark - Bob Webber - Ted Jones - Ken Leck Ilfracombe for the second time this year and the weather is so much better this time however, the weather hot and sultry and the stunning views from the golf course not much better than last time. Out at sea a heavy sea mist cancelled out the views to Wales and Lundy Island. Nevertheless the golf club always friendly and welcoming readied itself for the annual battle between Players and "Staff". Always hotly contested the surprising news was that the "Secs" were two players short. Fortunately the club came up trumps providing two players for the opponents, Roger Jones and the evergreen Bob … END_OF_DOCUMENT_TOKEN_TO_BE_REPLACED

You can find out more about which cookies we are using or switch them off in settings.

This website uses cookies so that we can provide you with the best user experience possible. Cookie information is stored in your browser and performs functions such as recognising you when you return to our website and helping our team to understand which sections of the website you find most interesting and useful.

Strictly Necessary Cookie should be enabled at all times so that we can save your preferences for cookie settings.

If you disable this cookie, we will not be able to save your preferences. This means that every time you visit this website you will need to enable or disable cookies again.